Momoko Sakura (Sakura Momoko, さくら ももこ) is the main character of the Japanese anime and manga series Chibi Maruko Chan. In the series she is always addressed through the nickname Maruko (まる子) or by her surname Sakura.

She is the protagonist of each and every known manga and anime episode to date, and is a character created based on the mannerisms and lifestyle of the author Momoko Sakura herself. She is a 3rd-grade elementary school student raised in a rather poor family within Shimizu City of the Shizuoka Prefecture in Japan.

Maruko has short black hair, with seven locks of hair which act as her bangs. Unlike most characters, she sports visible pink cheeks which easily distinguish herself from others and are a particularly unique trait to her image.

In most cases she is depicted wearing a white long-sleeved blouse, a red plaited skirt with attached shoulder straps, white socks and red shoes. Depending on the season during which an episode takes place, however, her clothes are changed to accustom the climate; in episodes taking place during summer, for instance, she instead weards a short-sleeved shirt (often in yellow) with shorts (often in red).

Maruko often carries a pleasant and co-coperative personality when in a good mood or amongst friends. She does also however possess a heavy tendency to become lazy or moody, especially whilst at home by sometimes back-talking to her parents or disobeying their orders - most often with her mother. She has a strong bond with her grandfather Tomozo, but is able to easily quarrel with her older sister Sakiko

There are times when she says things that trigger an awkward response from other characters, and has been known to sometimes sink into a pessimistic or negative atmosphere when she finds herself in an unpleasant situation.

She is most fond of animals, manga, drawing,

Maruko shows a great amount of interest in a wide variety of things; she likes to watch television whilst at home (often fond of funny variety shows or dramas), read books of various topics from famous people to wildlife and animals, interact with animals (cats and dogs in particular), buy candy (especially foriegn candy) and play with her best friend Tamae, nicknamed 'Tama-chan'.

Her main talents are focused on creative pursuits, most often through drawing in her free time whilst at home. She aspires to become a mangaka (manga illustrator) in the series, although she has also aspired for other positions such as a singing idol or world traveller. 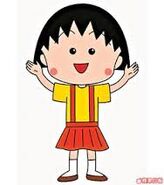 Add a photo to this gallery

Retrieved from "https://chibi-maruko-chan.fandom.com/wiki/Momoko_Sakura?oldid=4732"
Community content is available under CC-BY-SA unless otherwise noted.